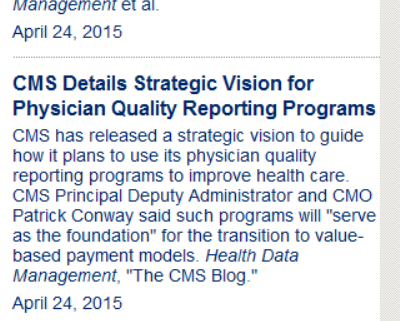 by Jane Sarasohn-Kahn
Monday, April 20, 2015
There were two overarching, converging themes at HIMSS15: Partnering for connectivity and person-centered care. Together, these two major themes move health IT from a product to a connector and enabler for individual and population health where people live, work, play and learn.
On the connectivity front, not-the-usual bedfellows came together at HIMSS15. This was most vividly and entertainingly represented by the joint presence of two major health IT CEOs in a sort of dueling comic relief at the annual (in)famous HIStalkapalooza party: Judy Faulkner, CEO of Epic, and Jonathan Bush, CEO of athenahealth. At the HIStalk event, these two influential health IT leaders traded barbs on stage and connected in good fun, resulting in a pie thrown in Bush’s face by a volunteer in the audience.